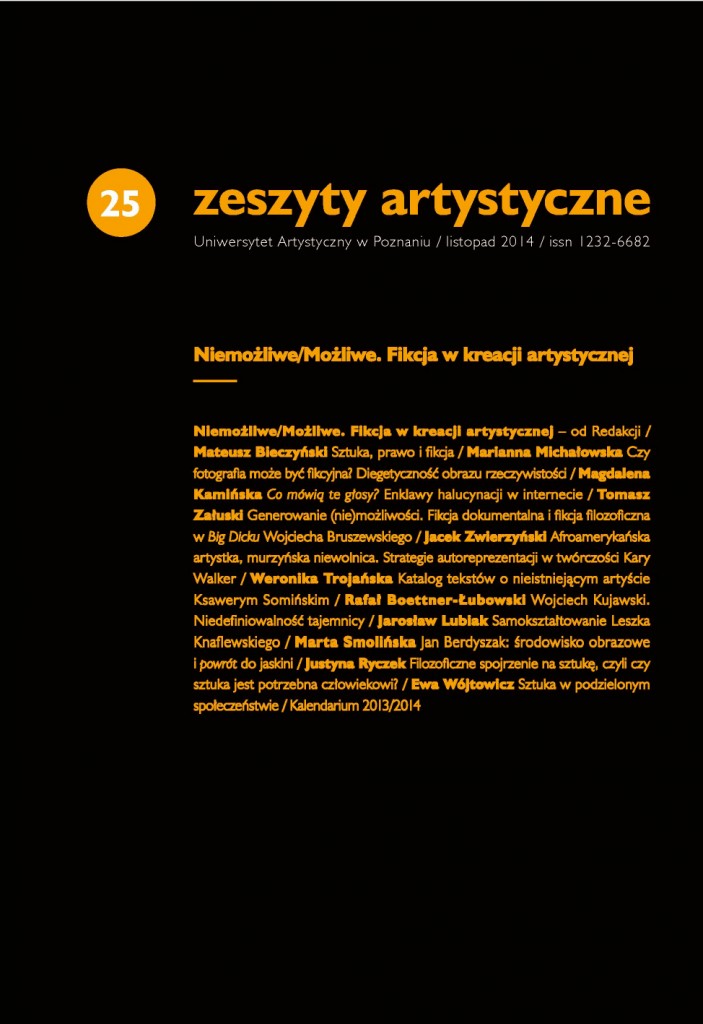 The considerations are concerning legal limitations of artistic freedom in so far not attended question if the fictionalization of reality in the art work is relevant for the scope of freedom to it by the law. This does not mean, however, that fiction, which can be seen as one of the elements of the art, is situated outside of the lawyers focus. On the contrary, the analysis of court proceedings against artists leads to different conclusions. Seeking for the protection of artistic freedom in the field of law in the favor of artistic fiction seems to be in the context of the contemporary art worthy of consideration.

Can photography be fictional? – diegesis of the image of reality

A diegesis of photography is considered in an article. The term, that is essential for literary and film studies, in regard to Gérard Genette’s theory, relates to the ability of creating of fictional events by the means of narration. Until the second half of 20th century, diegesis was seen mainly as an ability of film structure in opposition to photographic reality. However, a poststructural turn and transformations in the field of artistic practices entailed a change and photography started to be considered as diegetic as well. The article compares concepts by M.Bal and M.Fried to narrative tendencies in contemporary photography. An influence of renowned artists like Philip-Lorca diCorcia, Gregory Crewdson and Jeff Wall on art by Polish photographers (A. Pańczuk, Bownik, A. Grzeszykowska) is investigated too.

What do your voices say? Hallucination enclaves in the internet

In the first decade of its research, internet was considered as pan-inclusive and democratic media. After the social media revolution, as computer-mediated communication has been commercialized and tricking users into divulging information became massive practice, some exclusivistic tendencies begin to appear. Internet users started to bring to life cyber-enclaves – non-mainstream online communities which were disconnected and hermetic. The article presents a description of three types of the communities that concentrate on some special experience sharing. The experience, rejected by comparative Western culture, is based on `seeing things that do not exist`, or hallucinations. The unique experience connects online drug users, neo-shamans and schizophrenics. Their online communities rebel against social media mainstream and expose its limitations.

One of Kara Walker’s, the first African American woman artist to receive a star of the art world status, creative work themes is the idea of a Black subject as a container for specific pathologies from the past. An imaginary figure of Negress, infected with immorality, representing “all that is wrong and sexual and vulgar” is of fundamental importance to Walker’s self-creation. The artist titles her works, visualizing the repressed from the story of racial oppression, as if they were made by the Negress Burdened by Good Intentions or the Negress of Some Notoriety. She has herself compared to a fugitive slave, having only paper, a pen knife and ”some people she’d like to kill.” While writing about cutting “by the able hand” she lessens the intellectual value of creative process. A reach towards an ambiguous, confounded identity involves not only an emphasis of irony constituting subjectivity, but also introduces Kara Walker herself, a black woman and an African American artist.

The aim of the article is to propose a reading of Wojciech Bruszewski’s „documental fiction” Big Dick. Bruszewski’s literary works are closely related to his audiovisual experiment in the field of art from 1960s-1980s. What seems to connect the two fields is a practice of generating play and exchange between the real and the fictious as well as between the possible and the impossible. In Big Dick, which is a neo-dadaist summa of the 20th century, historical facts are rearranged and mixed with fictional narrations so as to create a kind of historical phantasmagoria. Its main “hero” is the swastika. The phantasmagoria allows Bruszewski to retell a geo-history of the swastika and design a(n) (im)possible project of “rescuing” it – by removing its negative meanings or connotations and making into a symbol of generative chaos.

The death of Professor Wojciech Kujawski overwhelmed the Poznań artistic and academic community with great sorrow and sadness.  Over the years, the artist developed a recognizable creative attitude, on the other hand, during these years, his art clearly changed and matured. Professor Wojciech Kujawski also served important functions and fulfilled various organizational tasks – for example that of the Dean of the Faculty of Sculpture and Spatial Activities of the Poznań University of Arts.  He was also a respected educator and academic teacher. His artistic work is one of the most interesting manifestations of the achievements of Polish contemporary sculpture.

Jan Berdyszak: the painting environment / returning to the cave

Jan Berdyszak sought the primordiality of painting – he wanted to restore its original form, from a time before the renaissance compositions had dominated the artistic practice. He would constantly break with the conventions that had any connotations with definitions proposed by Alberti (finestra aperta) as well as by Denis (i.e. paintings understood as flat surfaces covered with paint according to a particular pattern). By turning attention to cave paintings, he demanded replacements for the hierarchical, balanced, centered and orderly compositions, thus, proposing the notion of the painting environment. In my opinion, the artist did manage to fulfill his aims in the exhibition entitled “Jan Berdyszak. Horizons of Printmaking”. Especially the painting installation “Rest of the Rests”, which has been placed in the hallway of the older part of the National Museum in Poznań, should be perceived as the peak of this author’s artistic output.